The invitation came via a colleague in Rome who has been working with the archaeologists at the University of Sistan and Baluchistan (USB), at the far eastern edge of Iran. Giulio has been revisiting a collection of materials collected by Italian archaeologists in the 1960s along the border with Afghanistan. My resuscitated archaeological project—the one that I’ve been writing up for the past several years-- was conducted in the 1970s only a few miles away across the border, a border that did not exist when Cyrus was King of Persia. Giulio and I have lots to talk about. 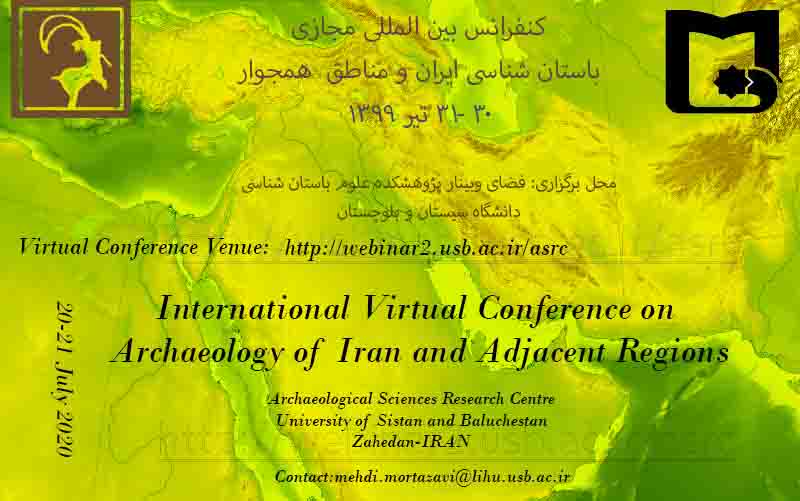 The first International Virtual Conference on the Archaeology of Iran and Neighboring Regions took place earlier this week. Sponsored by USB, based out of Zahedan, it gathered about 75 scholars interested in Iranian archaeology for two days of online papers. No opening wine and cheese reception or late nights talking shop at the hotel bar, but Iran is a Muslim country so that wouldn’t have happened anyway.

The organizer had a big problem. He had invited scholars from China, Australia, the Middle East, various spots in Europe and the US. What time of day does he hold the conference? No easy answers there. A 9 am start time in Zahedan-- which is what he chose, given that over half the attendees were local-- is 4 am in Oxford or Cambridge.  And for me, half a day off of Tehran time, literally night was day and day night.  I attended the conference from 9 pm to 8 am Sunday and Monday nights. I was still doing Monday when everyone else had already Tuesdayed.

Scheduling was problematic for my paper as well. It was scheduled as the last paper of the morning session. Through a complex time zone calculation, I figured out that I was due to start at 12:50 am… if the conference was on time. No academic conference ever runs on time, and we would be dealing with technology challenges as well as time management ones. As it turned out, I presented my paper a bit before 2 am.

There are a few advantages of this kind of conference attendance, even if you’re trying to stay awake for a session on Paleolithic environmental indicators or on Sasanian ceramic technology that runs from 3-6 am. One is chocolate chip ice cream. Imagine leaving in the middle of a conference session to go grab a bowl and slurp it down while sitting in those uncomfortable rows of chairs. Not a problem at a virtual conference.  Conference gear, shorts and a tshirt in my case, was another distinct advantage.

The lack of travel is yet another. Going to an international conference is a heady thing, but you gotta get there first. And, assuming Zahedan has an airport, it’s still 3 or 4 jumps from SFO and far more than 24 travel hours, even if one leg of the trip doesn’t get postponed or cancelled. So you arrive the night before after suffering your way through Heathrow, Istanbul, and Tehran, bad even in pre-COVID times.  Awake all night begging your body to be tired enough to sleep. Push yourself awake for the morning session fought by that damn internal clock telling you that it’s 10 pm and you should be sleeping. Then sitting in that uncomfortable chair in an uncomfortable room listening to an uncomfortable grad student trying to make sense of an uncomfortable topic as you’re uncomfortably jammed in close proximity with other people. The air conditioner vainly tries to catch up before finally surrendering to the heat. Zahedan? In July? Are you kidding? It probably makes Phoenix feel balmy.

Instead, I tried to catch the wee hours of the morning session – early afternoon by Iranian standards-- by dragging my laptop into the guest bedroom and watching it horizontally. Fall asleep? Just one of those risks. I’m going to suggest to Norm Denzin for next year’s QI conference to clear the chairs out of the meeting rooms, provide the attendees with foam mats, and have an ice cream bar in the back of the hall. If you want to keep your audience’s attention, you’d better plan on presenting a compelling paper. 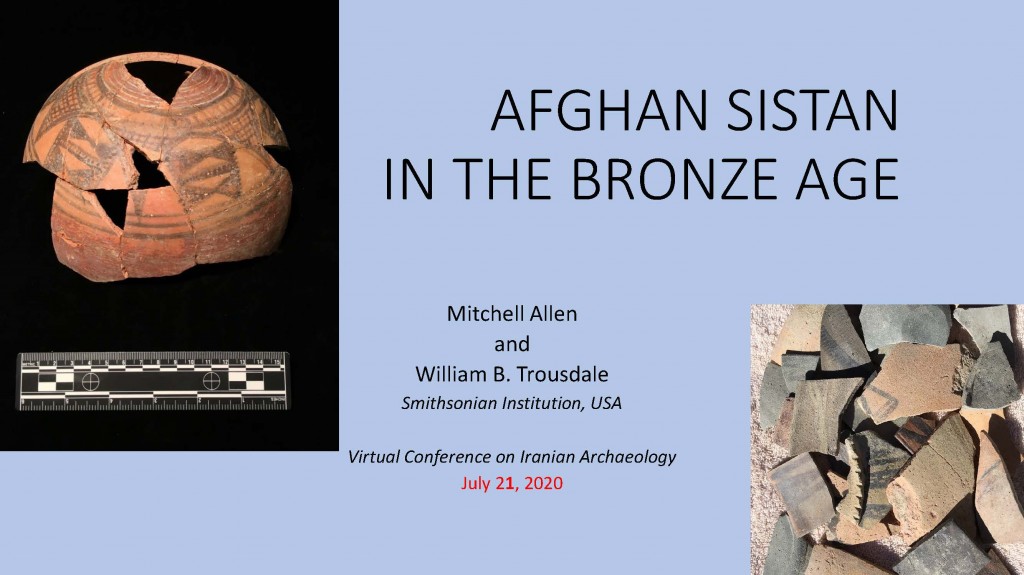 Figuring out how to tackle my own paper, Afghan Sistan in the Bronze Age, was a different challenge. Whenever I present on the topic, I always spend some introductory minutes telling people what and where Sistan is, a bit about the landscape, environment, and climate. I describe the incredible dryness, the strong winds that destroy archaeological sites, the waves of sand dunes, all based upon having been in Sistan for a few months 45 years ago. THESE PEOPLE LIVE THERE! Some were born in Iranian Sistan. Many had done archaeological fieldwork in the area last weekend, before the conference started.

I wrote a new introduction.

Technology and language were the two key other issues of an international virtual conference.

The organizers used Adobe Connect as their platform for the conference. We in the north seem to use Zoom, so there was a learning curve. Fortunately, there was a training session prior to the start to get presenters familiar with the features (and bugs) of the system. Still, there were people speaking emphatically into a muted microphone, others who presented a blank screen and a name as their sole visual component. People froze, disappeared, moved to slow motion and back, morphed into geometric patterns. Monty Python is gone, but they would have had a field day with a digital conference.

And what language do you use in an international conference, particularly if you can’t afford paid translators? They chose Farsi and English and the papers were equally divided between the two. Thank goodness for the English, I would have given up trying to understand papers in Russian, Chinese, and German, especially at 4 am. I was impressed by the skill of almost everyone in English, no matter their native language. Even most of the Iranian scholars presented in English or prepared their captions with English labels to allow us foreigners to follow their presentations. I was grateful. 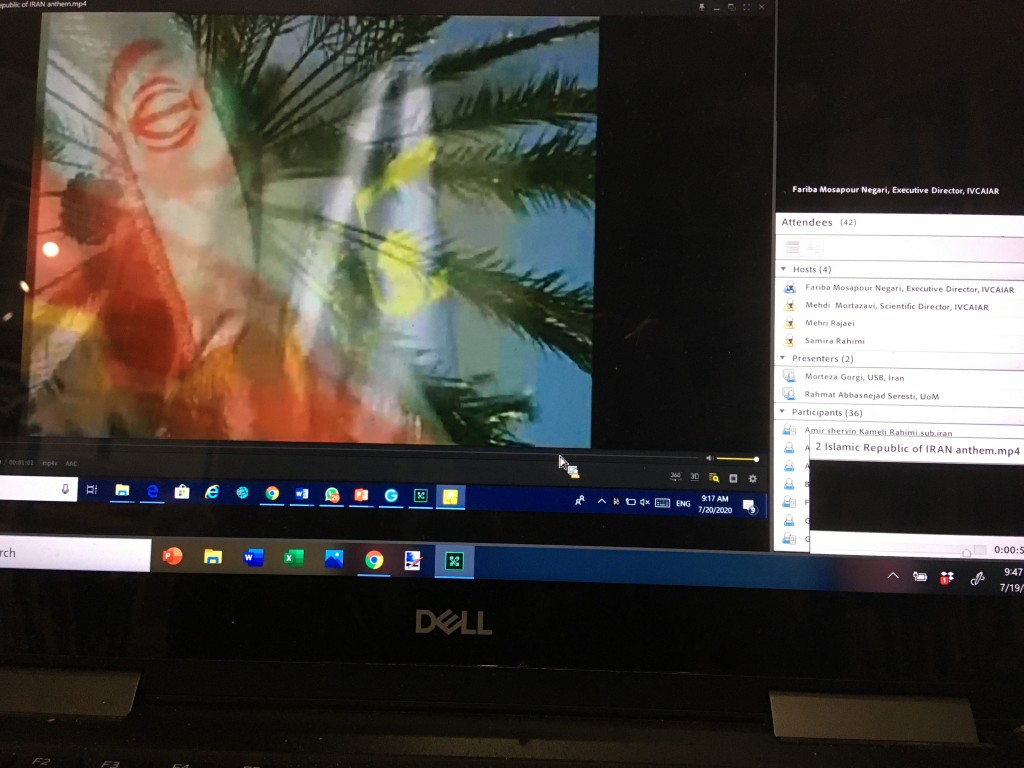 The opening session began with a prayer accompanied by a zoom-over of beautiful sites, beaches, mountains, sunrises, flowers. Then martial music accompanying a photo of the reigning Ayatollah, the Iranian national anthem, and a promotional video for the university. Obligatory nods to the powers that be, I was sure.

Monday night, I girded for an intense all-nighter. Papers zipped by one at a time along with the morning in Zahedan and the night in Walnut Creek. My slot was #11 in the queue. But #10 was the conference organizer. This was his moment, his reason for organizing the whole damn symphony, his one chance at being conductor.

He took it. In love with the technology of it all, he jumped from Powerpoint to Google Earth and back, never smoothly or quickly as he had imagined it in his mind’s eye. Speaking in English, the accent was tough to follow, made tougher by the poor microphone on his laptop that sounded like his mouth was full of marbles.

Then compensated by jacking the volume up to 11. Twenty minutes, the prescribed length, passed. So did 30 and 40. At last, he apologized for being long followed by, “I’ll be done in another few minutes.” They were very long minutes. The conference participants who hadn’t slipped away for their own ice cream or, more likely, lunch, got to hear me deliver my presentation on time and under budget.

It was exciting to be able to be virtually transported to Zahedan to interact with a bunch of scholars I would never have been able to visit, at least not until the US and Iran stop demonizing each other. I’m hoping for virtual field trips to nearby World Heritage sites like Shahr-i Sokhta or Kuh-i Khwaja next time. And I’ll be more prepared for the next virtual conference when it comes up. I miss the informal conversations between and after sessions to catch up on gossip and unpublished research. That can never be replaced by Adobe Connect. I’m much more aware of how being blessed with good technology makes a difference. But, otherwise, count me in.  Even at 2 am.