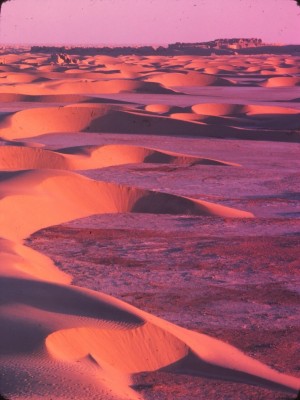 The memories only come back in flashes now. Standing atop the 100 foot high dune watching the sun set over an endless vista of sand. The howling winds shredding our camp as we sought cover 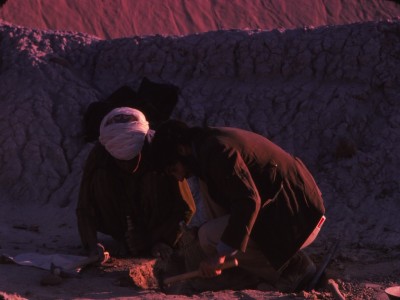 from wind, sand, and water in the Land Rovers. Crouching next to a teenaged Baluch workman carefully tracing a plastered floor with trowels and brush.  Watching our historical architect Jim Knudstad scrape away at piles of mud and magically reconfigure the plan of a Parthian house. If not for the photos, I am not sure I could convince myself that I had spent six months in Afghan deserts excavating sites untouched since they were abandoned millennia ago. But I did.

I’ve alluded to the fact that I’m now working on publishing the results of an archaeological field project with which I was involved in the 1970s, but haven’t ever fully explained what that entailed. It’s time for some context.

The region is called Sistan, originally Sakastan, the land of the Saka, a tribal people who wandered into the lower basin of Helmand River shortly after Alexander the Great came through. Today, Sistan is trisected between Afghanistan, Iran, and Pakistan. I’ve been to the border—it consists of a pile of stones. The Saka were not the first to live here, a lush river basin situated between India and the Middle East and surrounded by deserts will draw occupants for as long as humans have roamed the planet. We found evidence for at least the last six thousand years. If you lived here around the time of Jesus, the place was hopping, probably holding its largest population ever. Key to that was the canals leading from the river to a wide plain called Sar-o-Tar, east of the shallow brackish lakes where the Helmand empties its liquid cargo. When covered with irrigation canals and not sand dunes, Sar-o-Tar holds a population of thousands. But when something happens— a drought, a wave of sand, economic downturn, warfare, political instability, we looked at all those possibilities—the canals fill in and the area is abandoned. The last time that happened was in the 15th century, the time of Tamerlane, leaving a forest of abandoned mudbrick houses, some still standing three stories high, peeking out 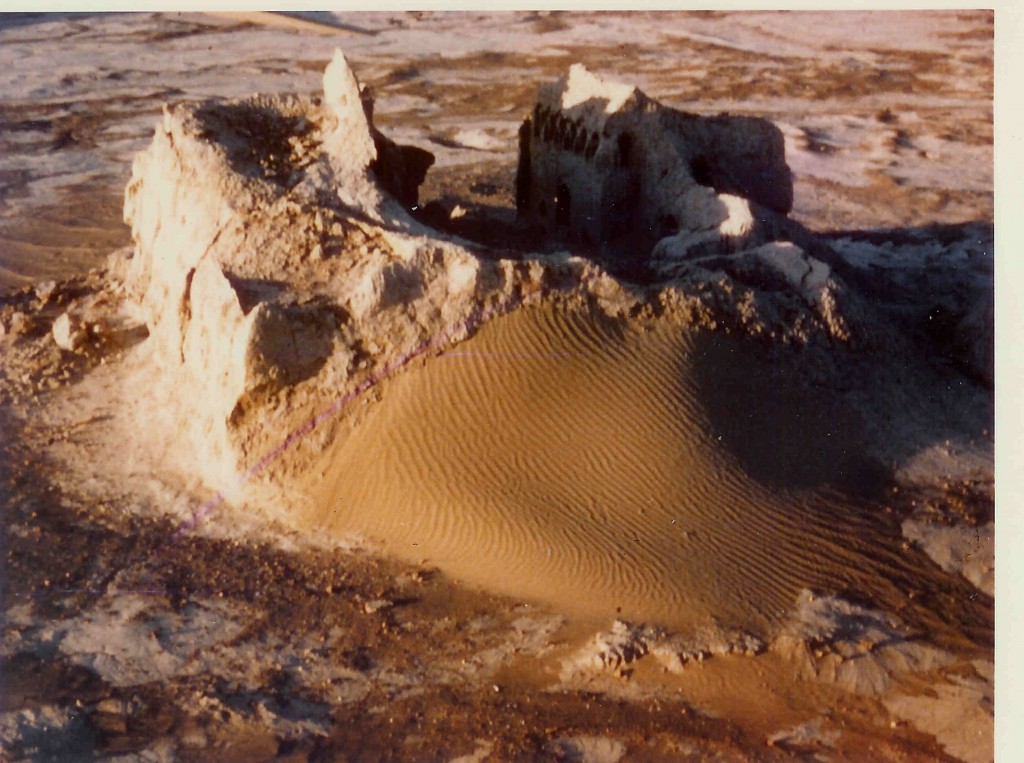 through the field of dunes. I excavated one of those houses, unearthing broken blue and black glazed ceramics, rusty copper coins, stone and metal tools, even cloth and hair preserved in the arid environment.

I ended up on the Helmand Sistan Project under less than ideal conditions. The director, Bill Trousdale, had been looking for a young, but somewhat experienced field  archaeologist to replace one of the previous season’s team, who  been extricated to a hospital in Frankfurt after almost dying of a blood disease in the field. He wasn’t coming back. Bill found me through one of my professors at Michigan. Grad students were always looking for exciting  field experiences. Afghanistan in 1974 was about as exotic a place as you can go. I don’t think Bill and I met face to face before connecting in Karachi in September of 1974, en route to our field site. He and his team had already been there for three fall seasons and would go back annually until the Russians invaded Afghanistan in 1979. I only went twice before getting a job in publishing. Sage frowned on new employees asking for 3 months off each year.

Bill Trousdale has never been a big guy. I towered a foot above him when we worked together in 1974 and even more now that he’s hunched over from 87 years of back problems. But neither his size nor his posture stopped him from pursuing his passion—Central Asia. His role model was Sir Aurel Stein, the British explorer, who spent the early part of the 20th century traversing mountains and deserts locating, and often looting, dozens of unknown archaeological sites. Bill 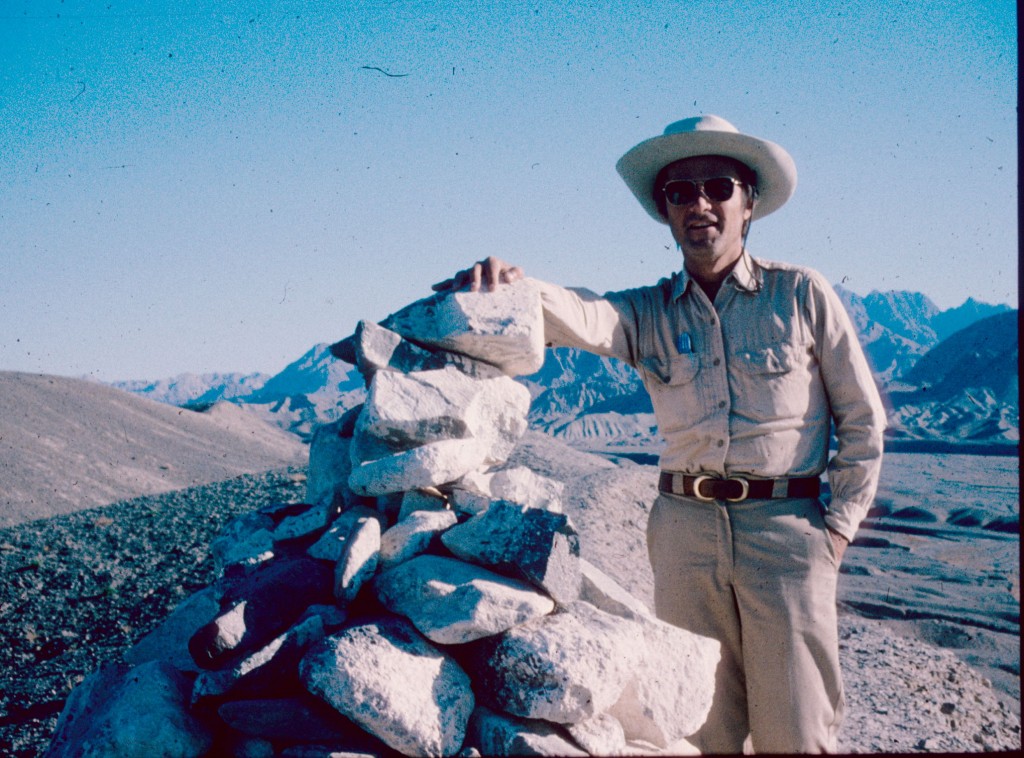 had spent his time in Central Asia too, on numerous reconnaissance trips as a Smithsonian curator and researcher.  Over the years I’ve discovered Bill’s other interests: one of the first Americans to visit Bhutan and view their cultural treasures; extensively researched military schools; an expert on the British colonial experience in India and Afghanistan. He haunted the ferengi cemetery in Kabul, documenting long forgotten western soldiers and adventurers who never returned. Billy Batman was my favorite. He’s almost done writing the definitive 19th century history of the Afghan city of Kandahar. At Left Coast Press, I published his book on military schools in hopes it would give him more time to finish our book on Sistan.  He went through a period following the professional skateboarding world as well, but we don’t discuss that. He keeps to himself: when I went to the Smithsonian looking for our project materials, most of the people I spoke to thought he had died a decade ago.

The Helmand Sistan Project volume was never completed and now, two decades after his retirement and two years after mine, it’s my turn to try to help him finish it. As I’ve described elsewhere, we have 40 field notebooks of site descriptions, excavation notes, ceramic drawings, and 15,000 photographs. My task will be to write up descriptions of the 200 sites we visited and documented; turn the excavation notes into a coherent description of architecture, stratigraphy, and material culture of the 17 sites that we dug; and (in archaeology-speak) establish a ceramic chronology to allow us to develop a cultural history of the area. With the help of a team at University of Chicago’s Oriental Institute, we should have an accurate map pinpointing our sites. We have coins, inscriptions, stone purses of travertine, and a brigade of ceramic horse-and-rider figurines to describe and illustrate, many safely housed in a Smithsonian warehouse.

ged to reengage John Whitney, the project geologist recently retired from a long career with USGS, to sort out the crucial climate, landform, and hydrological questions. That our project was asking these kinds of questions in the 1970s was revolutionary for its time. So was enlisting the Afghan government representative attached to the project, Mr. Amiri, to write an in-depth ethnography of the Baluch villages we stayed in. That will also appear in our report.

The list of acknowledgements from Bill’s draft of the front matter already runs three pages. It will be much longer before we’re done.

No one had done long-term systematic fieldwork in this area before. And, given the recent political history of the Afghanistan, no one will be back there to do more for at least another generation. This will be the only comprehensive archaeological record of Afghan Sistan for decades to come. It’s an important task to make it available for other archaeologists, for the people of Afghanistan, and for anyone else interested. I’m glad to be an active part of it after four decades away.